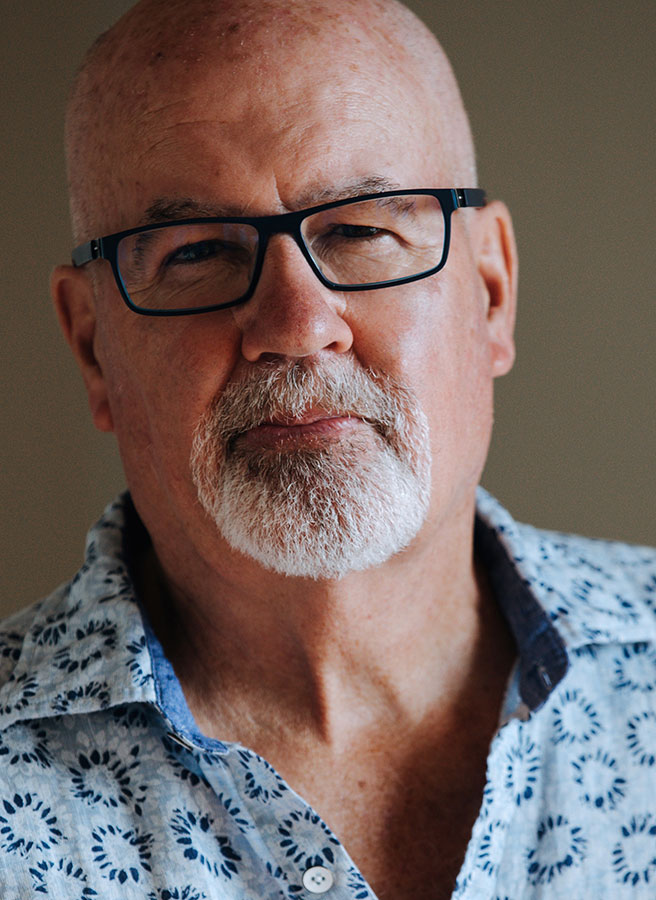 Always. I was fortunate to be part of a family that encouraged reading from an early age. I cut my baby teeth on Enid Blyton’s Famous Five series before progressing, in my early teens, to storytelling geniuses like John Buchan, Daniel Defoe and Robert Louis Stevenson. Then it was Robert Ludlum, John D. MacDonald and Steven King. Since then I have lived in a world of words.

Did that spark an interest in writing?

Without doubt. It helped that English was the only subject that I was any good at in school. I enjoyed writing essays on esoteric subjects. This, in turn, whetted my appetite for journalism.

Did you enjoy your time in newspapers?

To paraphrase a far better writer than me: “It was the best of times, it was the worst of times.” Overall, I had a wonderful career in journalism and was fortunate to work in a great many countries, including the UK, US, NZ, Australia and Canada. On the other hand, the higher one rises in the newspapers, the more dog-eat-dog it becomes – particularly, but not exclusively, in the UK. The upper echelons of what used to be called Fleet Street would make the Borgias look like Quakers.

It sounds as though you have some scars …

Both physical and mental! But I had a blast really. A newsroom is truly an exciting place to work; in my second book 'Deadline', my hero Jonno Bligh describes it thus … ‘a cauldron of creativity: stories breaking, phones ringing, keyboards clacking, voices rising in a cacophony of excitement and triumph. The atmosphere is thick with a heady, high-octane mix of inspiration, perspiration and desperation.’

Stressful but rewarding. After editing a few weekly papers, I graduated to editing metropolitan dailies when I was 32 - first in Yorkshire, then in my native Scotland where I was editor of the Evening News in Edinburgh. Then I became editor of the Daily Record, which was then Scotland’s biggest newspaper and the UK’s fifth largest. Running a busy newsroom is a heady, pressure-filled, action-packed experience that is not for the faint-hearted. The average day boils down to just two things: deadlines and decisions. And lots of them.

It is quite a position of power, is it not?

Yes, it’s true that an editor can help influence events both locally and nationally, but along with that comes the responsibility to use that power, not for personal gain, but for the public good. The upside was that an editor gets to meet incredibly interesting people – from Prime Ministers to princes, from Hollywood stars to heavy-duty gangsters.

Do any of those experiences appear in your books?

Both The Scoop and Deadline feature an Aussie journalist as the hero. Many of the journalistic references in both books are (more or less!) true. In particular, Book 2 is set in a newsroom so it points a lot more to my past. But, of course, various names have been changed to protect the guilty!

What inspired you to start writing fiction after a career in newspapers?

Many would say that working as a tabloid journalist is a good grounding for writing fiction. Most journos say they will write a book one day but surprisingly few actually do. In my case, I retired at a relatively early age and suddenly had the means, motive and opportunity to fulfil my own ambition to be an author.

Where did the idea for The Scoop come from?

It came from a dream! To be honest, I had always planned to write the book that became Deadline first off. But, to help me get to sleep at night, I used to have a trick of focusing my mind on being on a deserted island. As the nights went by, those moments between wakefulness and slumber became more and more exciting as I thought about how I might have got there and why, and then on to how I would survive in that situation. The possibilities became so gripping that I stopped trying to sleep and instead started writing notes down in the middle of the night! The result was The Scoop.

What is The Scoop about?

It is an action-packed adventure story that rollercoasters between Sydney, London, LA and SE Asia. The story centres on Jonno Bligh, a successful Aussie journalist who gets caught up in modern-day piracy in the Malaccan Strait. Jonno has his personal demons but redeems himself when he rescues British woman Annie Greenwood from a terrible death on an uninhabited Indonesian island at the hands of pirate leader ‘BangBang’ Budiman. They flee on Jonno’s boat The Scoop Jon B with the pirate spoils and BangBang in hot pursuit. They are saved by a naval patrol boat only to find themselves in a Jakarta jail accused of drug smuggling. The gangster tracks Jonno down in a Sydney marina, determined to kill him. Can Annie save Jonno as he once saved her?

So, a swashbuckling read?

Well hopefully there’s a bit more to it than ‘aargh Jim boy’! It is very much a modern love story, with two people who describe themselves as ‘damaged goods’ saving not just each other’s lives but also each others’ souls. There’s romance, revenge and redemption. I love the sea and sailing and it was a pleasure to be able to set a lot of the action on board The Scoop Jon B.

Who are your favourite authors?

I like all kinds of genres. For crime, I turn to John Sandford, Michael Connolly, Henning Mankell and Ian Rankin. For action and adventure, I am a fan of Robert Harris, Wilbur Smith and Lee Childs. Historical fiction is another interest and I reach for Bernard Cornwell, Simon Scarrow and Hilary Mantel. I intersperse thrillers with other, more complex stories and I enjoy reading Jodi Picoult, Herman Wouk, John Irving and Bryce Courtney.

You’ve lived in different parts of the world – your favourite place?

We’ve been lucky to live in some wonderful locations including Ilkley in Yorkshire, Edinburgh (where our two children grew up), Auckland in NZ and also in Connecticut, just outside New York City. I worked in San Francisco for six months. But Noosa in Queensland where my wife Patricia and I now live is the right place at the right time. It has the right mix of climate, lifestyle and scenery. My study overlooks the water and I am inspired to write every day.

Other than writing, what are your interests?

Sadly, I gave up my boat a year ago – I just wasn’t using it enough, partly because I was working on the books. I do all the cooking, which I love but the downside is that it means I also have to do the shopping! While writing and doing The Times crossword daily stimulates my brain, I keep my body in rough shape by going to the gym, playing tennis and losing balls on the golf course. Noosa is a very social place and we are never short of places to go and things to do here. That said, we also travel a bit – mostly to Europe and the US where our son still lives.

What do you enjoy about the writing process?

Everything. From plotting the whole story, to creating compelling characters to the actual writing – it has all been a joy. I thought I would be less keen on the research but I found that to be richly rewarding: every time I investigated some topic, I came away with new ideas for other elements of the book. Even the post-writing process was stimulating; my editors Roberta Ivers and Deonie Fiford gave me an object lesson in crafting a novel. I learned an incredible amount that was helpful for Book 2.

When will we see your second book?

The first draft is written but not yet edited. Simon & Schuster plan to release it in early 2020. It’s called Deadline and it features Jonno Bligh and Annie Greenwood up against desperate odds once again. It’s set in London, in the newsroom of a UK national newspaper against the background of Islamic terrorism and sinister Russian interference in European politics. Being a tabloid, there’s lots of crime, sex and dirty tricks! In the meantime, I’m underway on my third novel, provisionally called Dead Beat.