Doppelganger who is a master of ‘gulp fiction’ 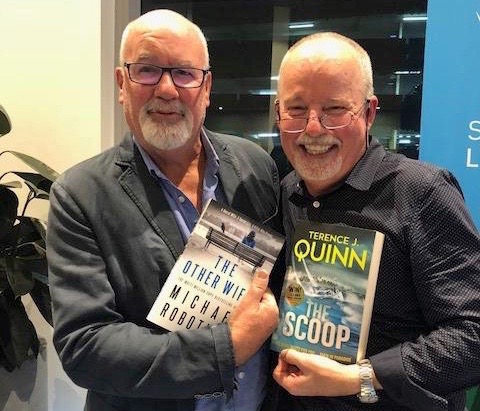 It was like being face to face with a doppelganger. Both of us follicle-free, sporting goatees and glasses, and clutching our respective books. As the photo shows, we could have been twins separated at birth (except, damn, he’s 10 years younger).

Apart from the age thing, the other difference, of course, is that Michael Robotham has sold a lot more copies than me – I think he said six million and change. But you would not have known it. Far from being a literary luvvie, he was warm, charming and generous with his time for a debut author like me. Perhaps because we were both once journalists in the UK.

Robotham was appearing at Maroochydore RSL to promote his book The Other Wife. I went along to listen and learn. I’m glad I did. It was a masterclass in how to captivate a crowd. Robo had the audience of more than a hundred in the palm of his hand. Most of them had read all of his 13 books to date. Many sat stroking a copy of The Other Wife on their laps like it was a pet Pomeranian.

On a show of hands, only one proclaimed herself a ‘Robotham Virgin’. In other words … had not read any of his books prior to the gig. That, ironically, was the interviewer – Sunshine Coast radio personality Sheridan Stewart. Not sure I’d have fessed up to that if I had been in her expensive stilettoes.

Robotham has an approachable stage presence, articulate, funny with a nice line in self-deprecation. He explained his approach to writing: he does not plot his books in advance. Instead he starts with a compelling premise, often based on a real-life event from his past as a national newspaper journo. He surrounds it with a cast of characters and lets the story unfold organically.

I, on the other hand, do not (yet) have the confidence to write that way – with such a leap of faith that the story will turn out all right. My style is a little more of clinical, loose-tight fit: I start with a rough outline of the whole narrative and then gradually flesh it out as I go along.

Robo is a successful crime writer. But he was in my position once with his first book The Suspect. And he warned me that, as a newly minted purveyor of ‘gulp fiction’ up against the Rowlings, Pattersons and, of course, the Robothams I would find that the battle of the bookshelves is fierce and frustrating.

You got that right, Michael!